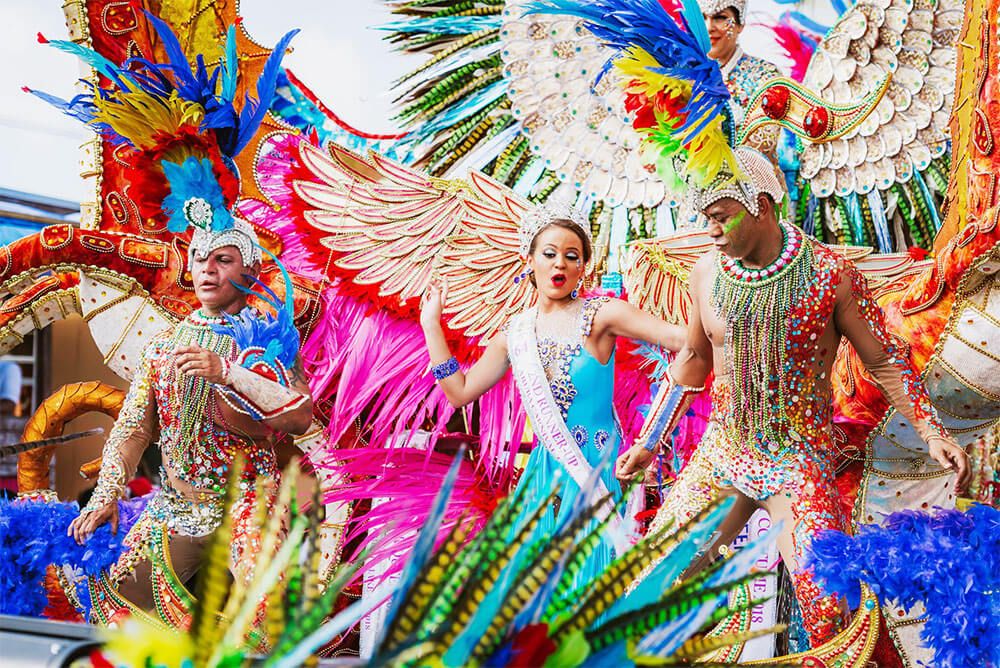 With an incredible electrifying energy, pulsating music, and beyond festive atmosphere, Carnival is the biggest celebration of the year in an island known for throwing the world’s biggest and most amazing parties. And guess what else? You’re invited! Carnival is a month long, high energy festival that combines a myriad of activities and event into one big explosion of fun.

Participants, fans, and observers can all expect to see music competitions, pageants, fantastic parades, street parties, and many other action-packed events throughout this entire period all over the island. The local residents especially look forward to the catchy calypso and Road March tunes.

And of course, we could never forget the amazing display of vibrant and bright color. An eclectic rainbow descends on the entire island in the form of magnificent floats, glittering costumes, shimmering clothing and apparel, and the incredibly luminescent decorations. Come and enjoy the Carnival queen coronations, bass-pumping sound trucks, and all of the rest of the hip-gyrating and booty-shaking madness that takes over Aruba this time of year!

The different parades alone are more than worth the trip. In addition to the Lighting Parade, thousands of people enjoy the Jouvert Morning Pajama Party, Children’s Parades, the Grand Carnival Parade, which is held in San Nicolas, and of course, the exciting conclusion to the entire event; the Grand Carnival Parade in Oranjestad. After that, the King Momo midnight burning signifies the end of Carnival season in Aruba. But not to worry, the spirit will rise again the following year as another round of the world’s greatest party ensues!

Although Carnival is a pre-Lenten festival, which is celebrated in many countries all around the world, it has its own unique origins and history of each place and Aruba is no different. It first began here as a series of small street festivals in 1954. Prior to that, Aruba’s oldest private social club had the first Oranjestad pre-Lenten celebration way back in 1944.

After the smaller street celebrations of 1954, the next year various districts and clubs got together to plan a more organized and all-inclusive public event and crown the first official Carnival Queen. The traditional Grand Parades began in 1957 and in 1966 the official Carnival organizing body was created. The twinkling nighttime extravaganza known as the Lighting Parade was added in 1981 and the party has just been growing and growing every year since.

And while we are quite certain that numerous other locations would say the same thing about their Carnival festivals, we can’t help but feel like there is just something a little extra special about the one here in Aruba. Maybe it’s because the One Happy Island is truly a place of celebration and excitement all year-round and that just makes us a little bit more skilled at throwing a massive blowout.

Or maybe it’s because tourists and guests who have visited Carnivals all across the globe say that ours is the only one they come to now. Or maybe it is simply because there is something magical in the island air in Aruba that has to be experienced to be understood. Regardless of what it is, it is here, and we hope that you will be as well.