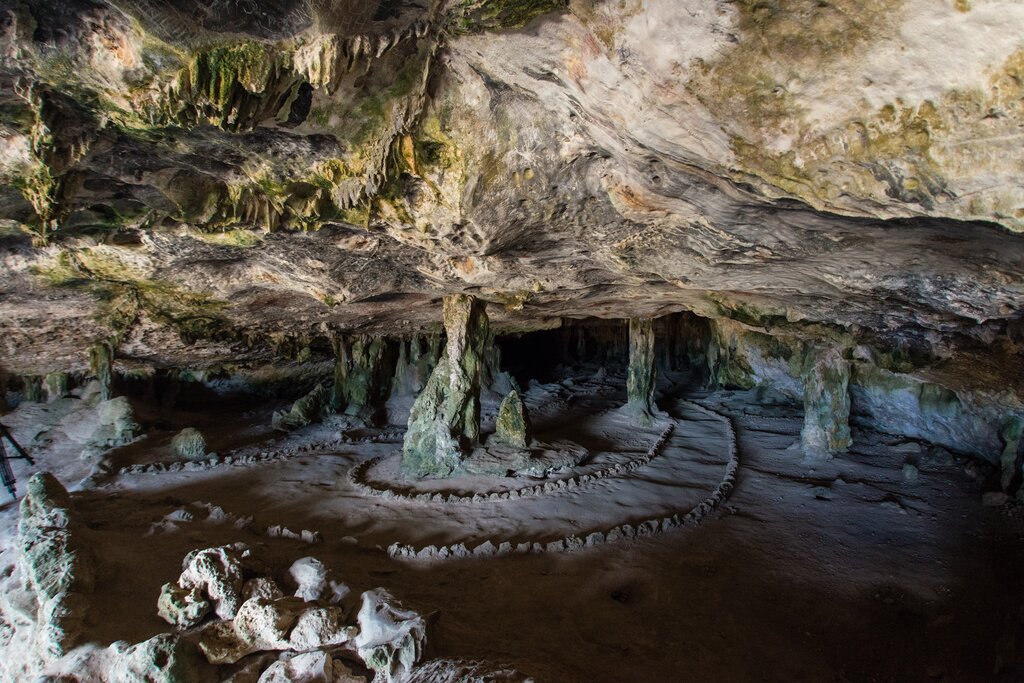 Mysterious, mythical and full of bats – welcome to the Fontein Cave in Aruba.

Although the island is home to a trio of famous caves, the Fontein Cave welcomes the most curious (or most weathered) of adventurers. Travelers may find themselves walking down the small, winding paths that lead down the Fontein Cave’s limestone walls.

It’s hot, dark and humid here. The Fontein Cave is ruled by algae, bats and the occasional crab – although it’s historically been frequented by people too. Thousands of years ago, Aruba’s natives left their marks on the Fontein Cave’s walls.

Today, you can still feast your eyes on those cave drawings, which literally reach from floor to ceiling. When it comes to the Fontein Cave, there’s a lot to unpack. So put on some airy attire, and let’s explore Aruba’s Fontein Cave together.

The mysteries of Aruba’s Fontein Cave

Spanning about 95 meters (almost 312 feet) in Aruba’s famous Arikok National Park, the Fontein Cave has much to offer. A natural wonder, the cave is brimming with stalagmites and stalactites. Algae make the wall go from yellow to green, like gradient wallpaper. That isn’t the only interesting thing the Fontein Cave’s walls have to offer. On them, you’ll find a fantastical selection of ancient drawings and etchings. Said to’ve been made by the Amerindians, you’ll learn more on those etchings later. The Fontein Cave’s dark snaky roads and unrelentless humidity make it the perfect dwelling for bats, crabs, insects and other creatures that crawl in the dark… so strut with care! Eery jokes aside, the Fontein Cave is a must-see on your Aruba travel itinerary. A little tip: Arikok’s park rangers are often keen to provide some extra info on the park’s natural wonders – including its Quadirikiri Cave and Fontein Cave.

Although the Fontein Caves of Aruba themselves are much older, their story begins about 4000 years ago, when the Amerindians (a group of nomads) settled on Aruba. Here they discovered the caves, which they decorated with drawings and etchings – perhaps even under the influence of psychedelics. Another story of the Fontein Cave’s history leads back to the Arawak Indians, living on Aruba around 1000 AD. Some people argue that they lived or hid in the caves, whereas other stories say they were mainly used as a place of worship, ritualistism and sacrifice. Although the truth might never be fully uncovered, it’s always a great idea to check out the etchings in Aruba’s Fontein Caves. You can decide for yourself which tale you believe.